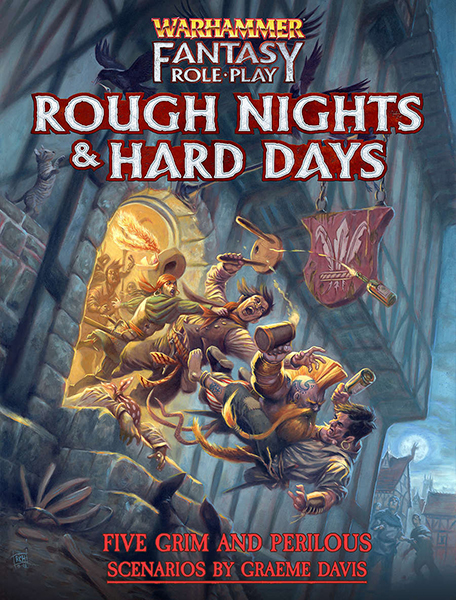 A collection of five new and classic scenarios written by WFRP Legend, Graeme Davis. These can be played as stand-alone adventures, or combined into an epic five-part campaign, where the Characters become embroiled in a bitter dispute between two of the Empire’s quarrelling noble houses. Rough Nights & Hard Days also introduces an entirely new playable species, and presents a variety of pub games to amuse and confuse your customers.

Rough Nights & Hard Days Includes:
• A Rough Night at the Three Feathers: a quiet evening at the riverside inn becomes very eventful indeed.
• A Day at the Trails: a much-awaited trial-by-combat becomes memorable for all the wrong reasons.
• A Night at The Opera: an evening of cultured opera descends into farce and horror.
• Nastassia’s Wedding: a celebrated society wedding does not go according to plan.
• Lord of Ubersreik: competing factions gather for a ball that quickly becomes a battlefield.
• Pub Games: one learns of the many pleasant pastimes of which one can partake in the local tavern.
• Gnomes: a mysterious, new playable-species is added to Warhammer Fantasy Roleplay.

Rough Nights & Hard Days is the perfect addition to any game of Warhammer Fantasy Roleplay as it can be used to start a new campaign, to support the design of exciting locations, or to enhance an ongoing story with exciting new adventures and rules.