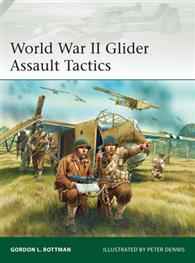 Military gliders came of age in World War II, when glider assault infantry were the forerunners of today’s helicopter-delivered airmobile troops. From the light pre-war sports and training machines, several nations developed troop-carrying gliders capable of getting a whole squad or more of infantry, with heavy weapons, onto the ground quickly, with the equipment that paratroopers simply could not carry. They made up at least one-third of the strength of US, British, and German airborne divisions in major battles, and they also carried out several daring coup de main raids and spearhead operations. However, the dangers were extreme, the techniques were difficult, the losses were heavy (particularly during night operations), and the day of the glider assault was relatively brief. This book explains the development and organization of glider troops, their mounts, and the air squadrons formed to tow them, the steep and costly learning-curve and the tactics that such troops learned to employ once they arrived on the battlefield.