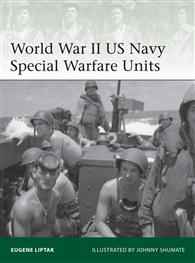 With the need for large-scale amphibious landings to decide the outcome of World War II the US Navy developed several types of specialized unit to reconnoitre potential landing areas, degrade the enemy’s ability to resist, and assist the landing forces on to the beaches. The Scouts and Raiders were the forerunners of the SEALs, Beach Jumpers made elaborate simulated landings to distract the enemy, the Naval Combat Demolition Units and Underwater Demolition Teams cleared obstacles to amphibious landings and Naval Group China fought alongside Chinese guerrillas behind Japanese lines. This book uncovers the fascinating history of these units, the unique gear they went into theatre with and the vital roles they carried out throughout the war.